The One Step Team

With well over 150 years of combined experience, One Step’s team remains Committed to helping as many animals as possible. 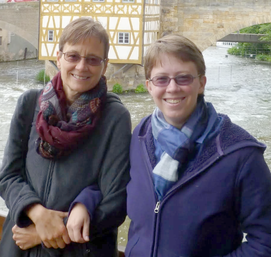 Anne Green, Co-Founder and Executive Director
​Anne (left) is a long-time advocate for animals, having gotten started at Students for Animal Rights in 1992 (please also see this). Anne was also Vegan Outreach’s founding Vice-President in 1993. A teaching professor of German at Carnegie Mellon University during that time, Anne’s salary underwrote Vegan Outreach’s first years and allowed the group to become established. During her tenure at Carnegie Mellon, she published widely, was elected President of the American Association of Teachers of German, and received her college’s top award for excellence in teaching. In 2007, she left academia to work full-time for the animals as Vegan Outreach’s Director of Development and Programs. Her efforts helped increase VO’s income more than 2.5 times and expand the Adopt a College program to reach nearly one million students in Fall 2013. When she’s not eating them, Anne enjoys learning about and growing plants, especially those of the Sonoran Desert of Tucson, where she lives with her husband, Matt Ball. The third member of Team Green-Ball, EK Green (right), is a lifelong vegan and a graduate of Pomona College with a degree in Molecular Biology with an emphasis on Public Policy. EK also has a Masters in Economics and is currently working on a PhD, having previously spent two years at the Science and Technology Policy Institute in DC. 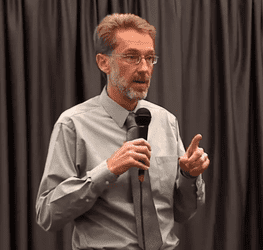 Matt Ball, Co-Founder and President
For over two decades, Matt has been a globally-recognized authority on animal advocacy, factory farming, vegetarian diets, and applied ethics. Matt had recently been Director for Engagement and Outreach for Farm Sanctuary. Previously, he was Senior Advisor for VegFund, and co-founded Vegan Outreach and served as the group’s Executive Director for more than 20 years. Matt’s vision and experience built the organization into a leading animal advocacy charity, with many thousands of active members around the world. Matt has presented at and written for diverse forums over the past two decades, and he is the author of many essays and several books, including: The Animal Activist’s Handbook (2007) and The Accidental Activist (2014). In 2005, he was inducted into the Animal Rights Hall of Fame. Please also see this 2015 article. 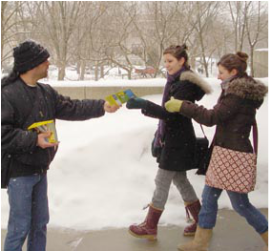 Joe Espinosa, Co-Founder
From his Unsung Hero award:
When Joe Espinosa discovered the hidden truth about farmed animals 20+ years ago, not only did he change his diet, he immediately became an activist.

No one has been seriously leafleting for the animals longer than Joe. Even before the formation of groups that promote leafleting, he was out in public, being a voice for the voiceless. Even with his grueling social worker job, Joe has advocated for the animals without pause, and in 2014 the milestone of reaching 500,000 people by directly handing them booklets.

“Total dedication to the animals” seems to apply to thousands, but, at the deepest levels, is not as common as one might think.

We are social animals, of course, and almost can’t help but crave the approval of others. We want our personal beliefs validated, we want to be popular — these desires are almost irresistible. The new, the cool, the celebrated and crowd-pleasing all pull us, consciously and not. For most of us (and we admit, this has been the case for us, too), these cravings shape our advocacy, tugging us toward actions that gain the approval of other activists, rather than what is the absolute best for reaching new people and getting them to take the first step on the journey of helping animals.

Joe has resisted the siren song of the popular, overcoming the yearning for approval. His dedication is unwavering, his vision unclouded: the animals are the bottom line, period. He is a true hero who has accomplished far more than any of us know or can adequately appreciate. 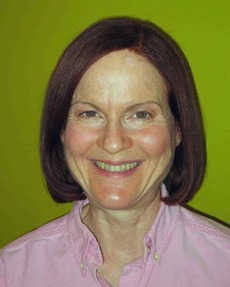 Cathy Berlot, Board of Directors
Cathy is honored and excited to join such an experienced, wise, and effective group of animal activists in this new venture to decrease animal suffering. She is currently in transition between a career in biomedical research and a calling to make the world a better place for all animals, human and nonhuman. Cathy became aware of the vast suffering endured by animals used for food when she moved to rural Pennsylvania, where she observed their living conditions first hand during her runs in the countryside. This awakening is described in her first animal-related publication, “Striving for Peace in Every Step,” a chapter in ﻿Running, Eating, Thinking, edited by Martin Rowe. After reading up on animal agriculture, deciding to change her diet, and attending animal rights and protection conferences, she initiated her animal activism by hosting and leafleting activists, and by providing financial support to several worthy nonprofits that seek to reduce animal suffering. After living for 13 years in the environment that forever changed her views on eating, suffering, empathy, and justice, she, her spouse, and 11 primarily vegan rescued cats are about to move to Portland, Oregon, where she plans to connect with the animal activist community to bring about meaningful changes for animals. 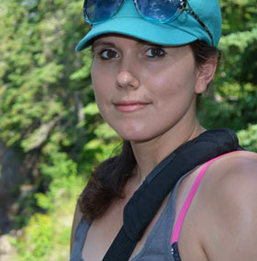 Mandy Tucker, Designer
“I have loved animals all of my life, but one day as a teenager it dawned on me that I was eating some of those very same animals that I loved, and that they were treated so cruelly.  I could not support this, so I decided that I was going to stop eating meat.  A couple years later I ditched eggs and dairy, and 16 years from that point on I have not looked back.  I became an advocate in college in between working full-time and taking full-time classes.  I actually met my husband while leafleting, and since then we have leafleted many times together.  I am a graphic designer, taking on many freelance projects across the United States, and I also work full-time at a vegan restaurant, Ely's To Go, which is an awesome job because I work with a great group of friends creating delicious, compassionate food that is extremely popular and enjoyed by many people - not just vegetarians!  I don't necessarily like to be sitting still for very long, so in my free time you can find me paddle boarding, running, hiking, biking, roller skating (I played roller derby for 6 years!), and hanging out and traveling with my husband.” 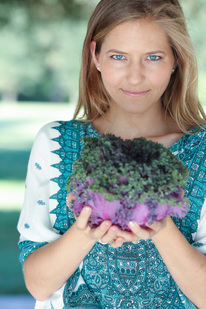 Michelle Cehn, Videographer
“I'm on a mission to change the world, one video at a time. My goal is to help people align their actions with their values, and to provide inspiration and support to help make lifestyle changes easy and fun.

“I'm driven by compassion for animals and a passion for vegan food, photography, video journalism, social media, and creative activism. I have been creating bite-sized videos for more than 6 years now. I want to help my fellow earthlings thrive, celebrate everyone's kind choices, and do even more to help animals.” 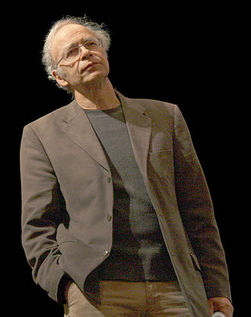 Peter Singer, Advisor
From his Wikipedia page: Professor Singer is currently the Ira W. DeCamp Professor of Bioethics at Princeton University, and a Laureate Professor at the Centre for Applied Philosophy and Public Ethics at the University of Melbourne. He specializes in applied ethics and approaches ethical issues from a secular, utilitarian perspective. He is known in particular for his book, Animal Liberation (1975), a canonical text in animal rights/liberation theory. On two occasions Singer served as chair of the philosophy department at Monash University, where he founded its Centre for Human Bioethics. In 2004 he was recognised as the Australian Humanist of the Year by the Council of Australian Humanist Societies, and in June 2012 was named a Companion of the Order of Australia for his services to philosophy and bioethics. 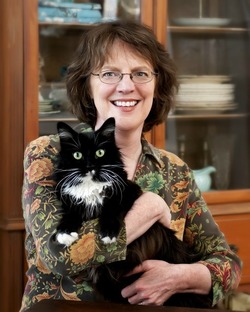 Ginny Messina, Advisor
Ginny is a dietitian and long-time animal advocate. She is the author of Vegan for Life and Vegan for Her, as well as author of the first textbook on vegetarian nutrition for health professionals and students. She writes about nutrition on her blog, The Vegan RD, is a frequent speaker at both advocacy events and scientific conferences, and has published papers on vegetarian and soy nutrition in medical journals. Most relevant to One Step, she is the world's leading nutritionist regarding ethical diets, and the author of Bad news for red meat is bad news for chickens - an absolute must read for everyone.

Ginny taught nutrition to dietetics students at Central Michigan University, was a dietitian for PCRM, and was director of nutrition services for a large medical center in Washington, DC. She lives in Port Townsend, Washington with her husband and an ever-changing population of rescued cats. When she’s not researching and writing about nutrition, Ginny volunteers for her local animal shelter and spay/neuter group, practices piano, gardens, collects vintage kitchen linens, and is learning to knit with plant fibers. 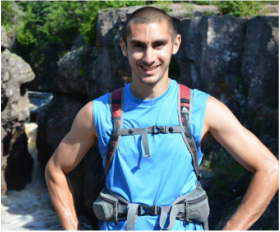 Dan Kuzma, Advisor
“When I was just 16 years old, I would have never expected myself to make a significant change in my life such as the way that I changed what foods I consumed.  I ended up adding so many more awesome foods to my diet while I eliminated meat, eggs, and dairy.  It wasn't based on health reasons, but was solely due to the fact that I could not stomach what was happening to animals on factory farms when I finally learned what was happening to them.  I didn't eat vegetables and wasn't too keen on beef or pork, so my previous diet in my teenage years consisted mostly of chicken and fish, you know, the 'healthier' meats.  A couple months after my transition, I became an advocate for the animals in my high school.  The advocacy continued throughout my college career, and currently I still leaflet and give talks when I have a break from managing a college recycling program and teaching Environmental Science part-time.   In my free time, which I highly value, I do make time to explore and travel.  My favorite hobbies are running long distances (marathons and beyond), backpacking, gardening, and spending time with my wife, family, and friends doing many of those things.”
Harassment and Non-discrimination Policy